Vancouver has been hailed the food truck capital of Canada. Even so, you’ll be surprise, food trucks that truly stand above the crowd are far and few in between – we still mostly see the standard hot dog stands in Vancouver.

With this said, Vancouver still has a more vibrant food truck scene than most cities in North Vancouver and as varied as our artisan coffee roasters. For this, you have Vancouver City Councillor, Heather Deal, to thank in part who has advocated for the growth of this industry. She believes it’s a reflection of this city’s creativity and identity. Even with the city advocating for the growth of Vancouver food trucks industry…there have been many great food trucks that still unfortunately had to close including PazzaRella.

Here, we have the five best food trucks in Vancouver:

Don’t underestimate these chicken wraps. Eat! Chicken Wraps is an unassuming food cart typically parked opposite Chipotle on Howe Street. Conveniently located near UBC Robon, the law courts, and smacked in the center of downtown Vancouver, EAT! Chicken Wrap is the epitome of Vancouver food trucks, a fusion of cultures perfectly executed in a delicious chicken wrap.

Their specialty is the Hoisin Chicken Wrap  although you can’t go wrong with any other variety of chicken wraps at this Vancouver food truck. Many have likely walked by this unassuming food cart many times not knowing the deliciousness that comes out from this Vancouver food cart. Go ahead, grab your protein packed wraps on the go the next time you walk by.  They really should use better signage; it’s a disservice to passer-by who miss out on such delicious food. 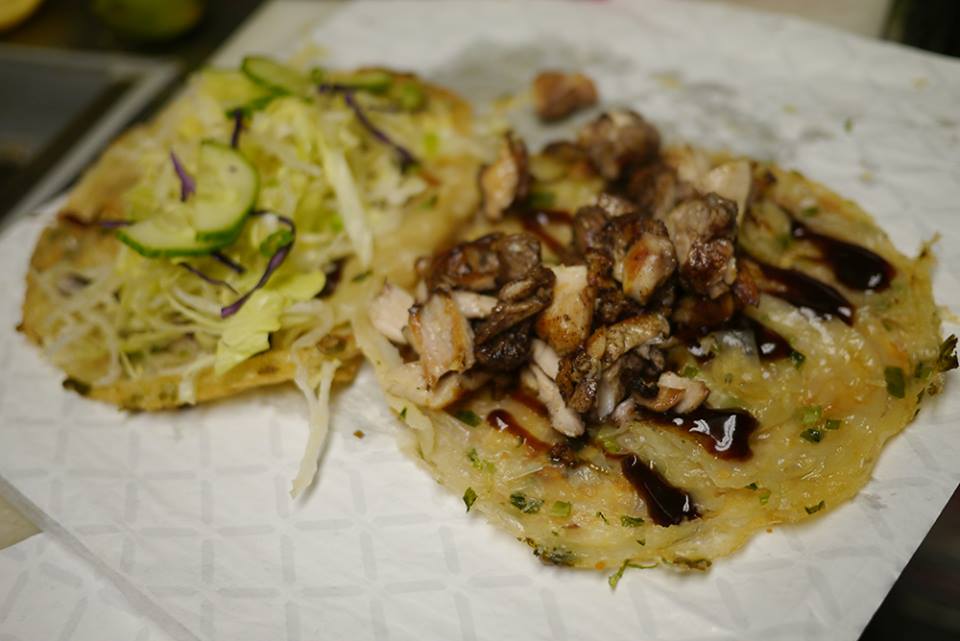 This wonder of Vancouver food trucks was conceptualized in 2012 by Clement Chan and Steve Kuan both of which carried years of culinary experience as apprentices and training at local Vancouver Career College (Clement) and Pacific Institute of Culinary Arts (Steve). Putting their experience, passion for food, and ethic background together, these chefs bring some of the BEST food found in any Vancouver food trucks with no exaggeration. Le Tigre is a mix of Chinese street food matched with fine dining (as fine as a food truck can be – one thing in common is the small portions though! No, it’s not actually that small but you always need more Kick Ass Rice.).

At Le Tigre, patrons typically go for their specialty, the Kick Ass Rice which is a rice dish cooked in Sake, butter, and dashi (yes it tastes as good as it sounds) accompanied with a poached egg, herbs, and a protein (which seems to change occasionally). Another must-try at Le Tigre is the signature “angry kitty cat squares” composing of fried rice, kimchi, and herbs deep fried in squares served with nori. (I’m curious if they got the name from all the Hello Kitty toys given by McDonalds in Asia?) Le Tigre is an absolute must try as far as food trucks in Vancouver are concerned. 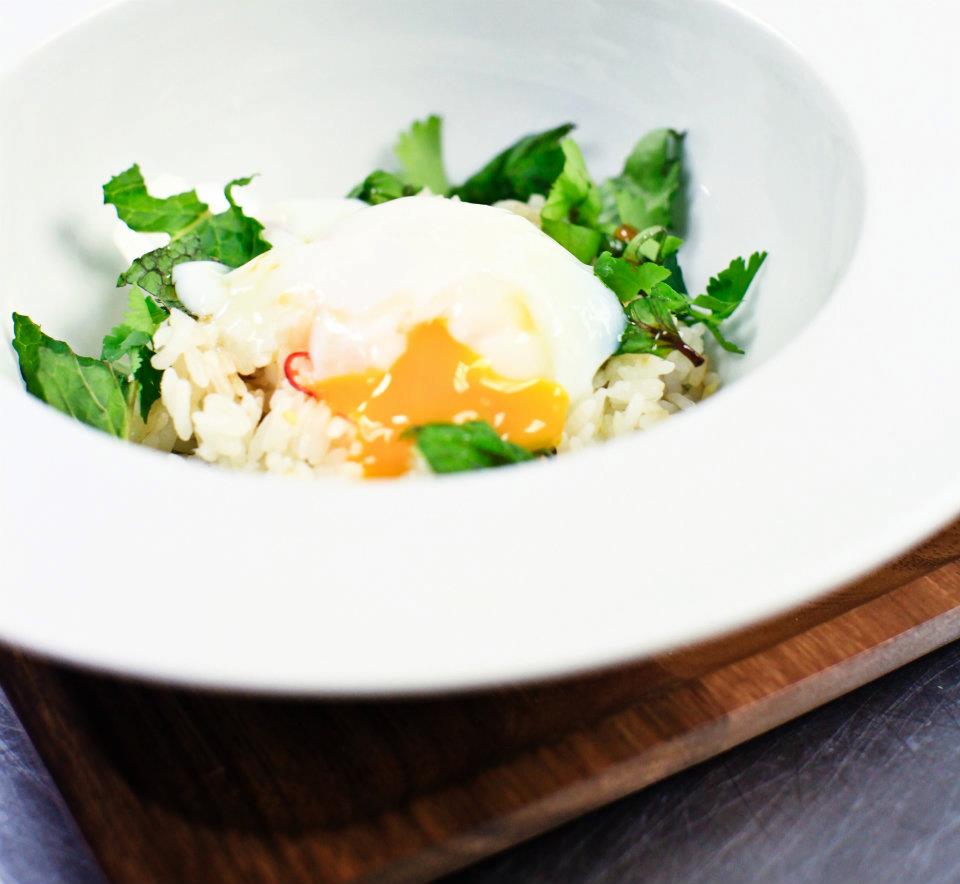 Look at that Kick Ass Rice at Le Tigre! A Must-Try fare for Vancouver food trucks. (It may seem unexciting but it is a flavorful dish)

As with Food Trucks in Vancouver, Le Tigre roams about the city of Vancouver. Find their full schedule here: http://www.letigrecuisine.ca/contact-us/

Japadog started in 2005, with hard work and perseverance what begun as a street cart by 899 Burrard Street is now five food carts, one food trucks, and a store at Robson Street.  Their Japanese style hot dogs are a MUST try for tourists and visitors; it’s the poster child of Vancouver’s Food Truck success. Some accredit (rightly so) Japadog as the catalyst for  the unique variety of Vancouver street foods.

Japadog has build such a following for good reason; it’s been highlighted by tourists during the Vancouver Winter Olympics and visited by various celebrities and icons. They are most known for their original creations, TeriMayo Beef hotdog which as it’s name implies is a teriyaki style hot dog topped with mayo and nori. Another popular favourite of their fans is the Kurobuta Pork Hot Dogs which is made with succulent Kurobuta Pork. Japadog invited the popularity of diversified street food! (and many other great Japanese style Food trucks in Vancouver.) 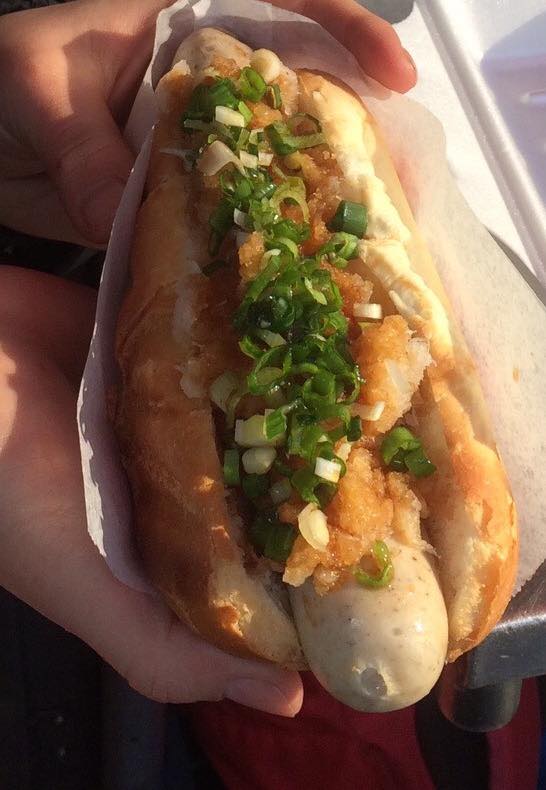 Look at this! Japadog in Vancouver.

Originating from Tofino, TacoFino has finally made it’s way to Vancouver. Taking it’s roots in Tofino, it gained quite the media buzz for their Baja-Style Fish Tacos. Tacofino serves incredibly fresh fish tacos with a rabid following of surfers. This was the kind of food you would go out of your way to try.

Since coming to Vancouver, owner and taco legend, Kaeli Robinsong continues to hold true to their originating recipe of “offering quality, freshness and affordability with an environmental and nutritional conscience.” It seems to be working, as fans are coming by flocks to their Vancouver outlets. Even though Tacofino now has two food trucks in Vancouver, and several branches…they still hold true to the consistent quality and freshness with their food. (all made from scratch!) It’s absolutely a MUST try food truck in Vancouver once it’s up and running. You won’t miss that bright orange/yellow truck around your neighborhood.

Some bites you have to grab at Tacofino Vancouver is their famous Baja-Style Fish Tacos. Another popualr choice is the Tortilla Soup. For that matter, just try the whole menu, it’s all good! 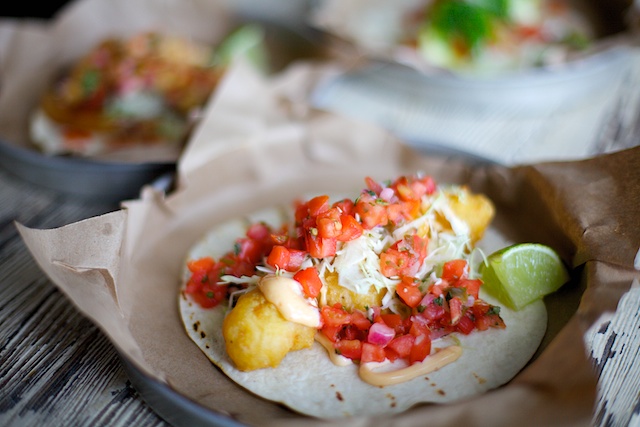 Address: Temporary close for the Winter (They have a shop in Gastown though)

Yolk is a Vancouver favourite as far as breakfast food trucks are concerned. They bring an elevated approach to breakfast. Perfectly poached eggs on anything from duck confit eggs benedict to your standard perfectly executed eggs benedict!

Yolk is a Vancouver icon of it self serving up delicious, mouth watering bites. We highly recommend visiting their food truck by Bentall Centre. 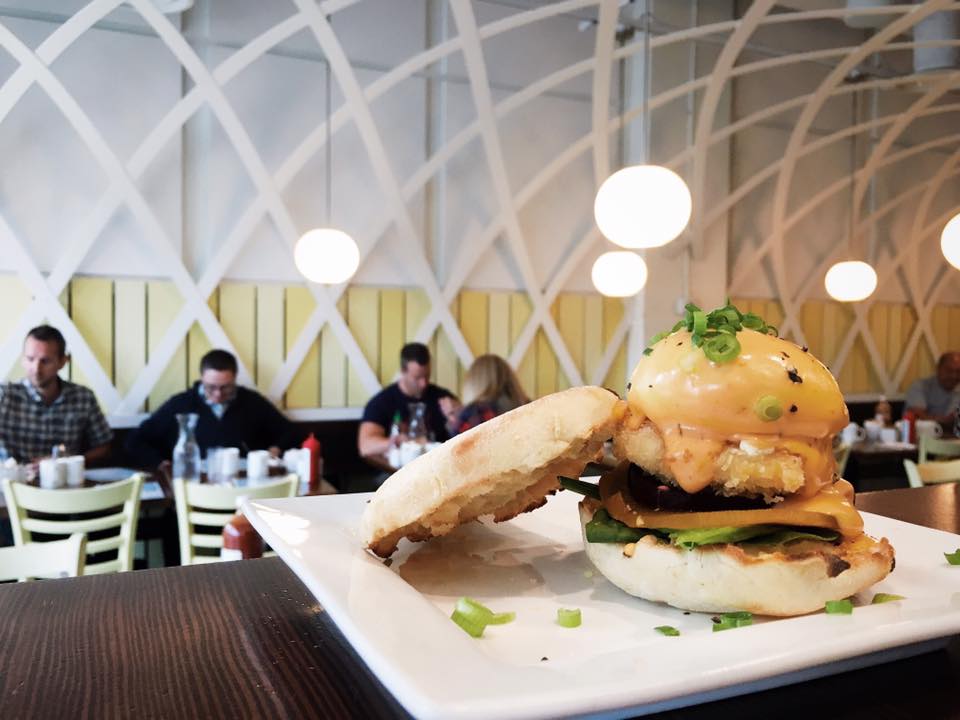 Yolk is a food truck but they also have a store at Broadway. Check out this dish!

Share your feedback, comments, and questions in the comments bellow! There were quite a few that would have been featured but choices had to be made 😉

Operating a food truck is hard work. A typical foods and beverages operation is difficult enough with long hours, quality-checks, and business admin tasks. A food truck has a whole other element; imagine preparing food in the small confined space upwards of 12 hours per day. This has forced a few amazing food trucks out of the race such as PazzaRella (arguably was one of the best pizzas in Vancouver? The maestro from Bella Gelateria used to frequent this joint so it has to be good.) among others such as Nu Greek, Bun Me Baguette, and Taser Grilled Cheese. Seems like good food is not enough to sustain a business.

It’s great to see the diversity and quality of food trucks in Vancouver despite the uphill climb. These local business fully deserve the applause for their determination, hard work, and great food! 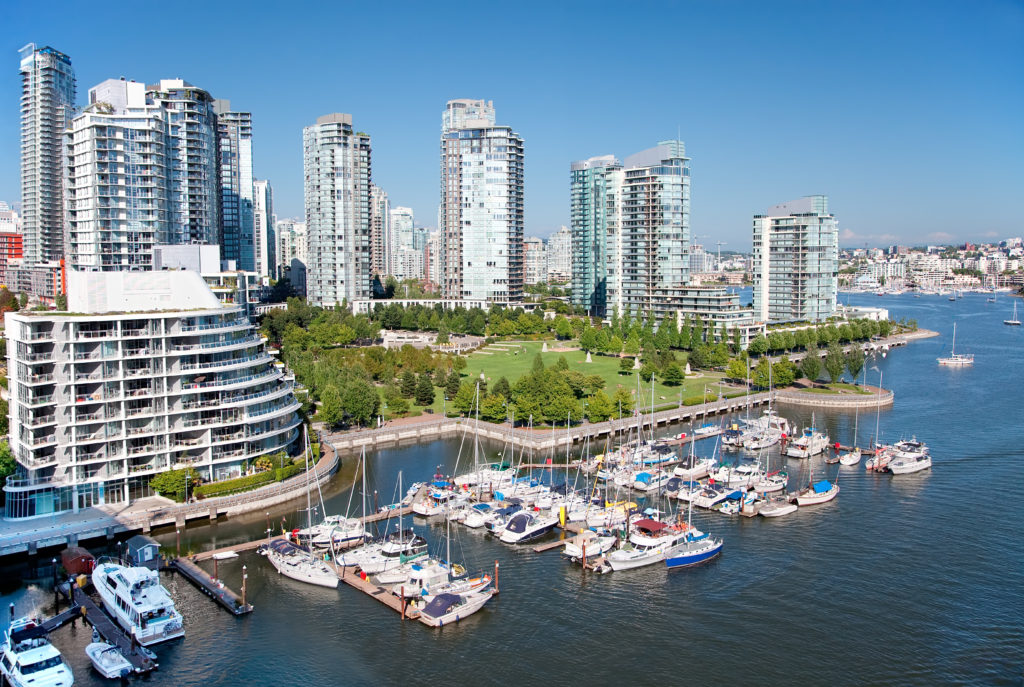 Looking down from the Granville Bridge, this is an east view of False Creek, a short inlet in the heart of Vancouver, British Columbia, Canada. The green area is George Wainborn park surrounded by tall condo buildings, the seaside bicycle route and the marina. False Creek separates downtown for the rest of the city. 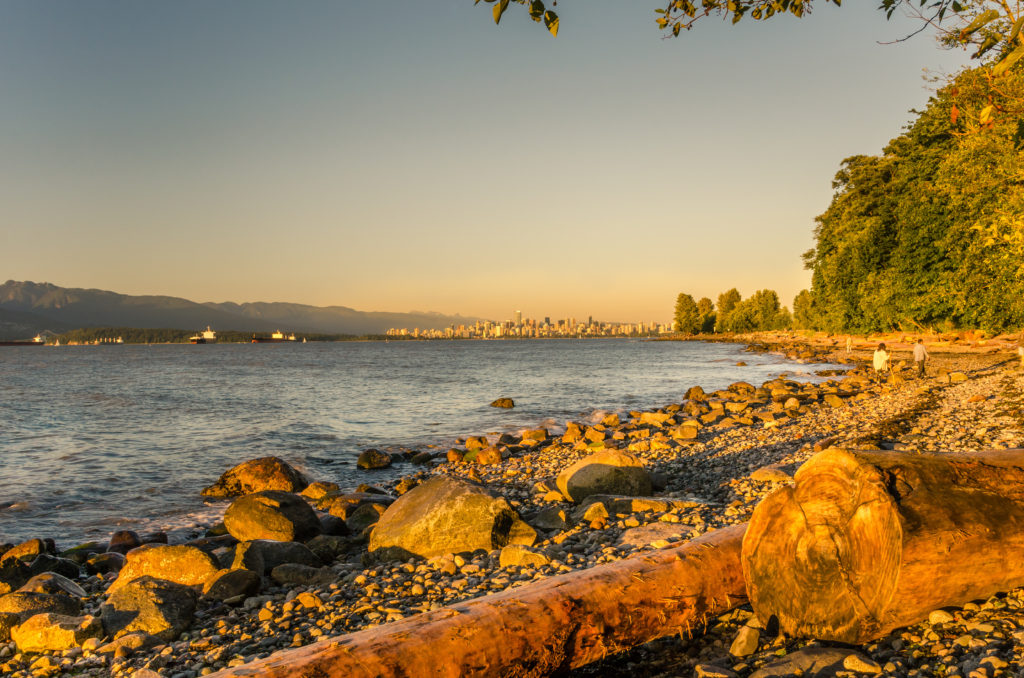 VancityAsks.com Picture of the Day #3 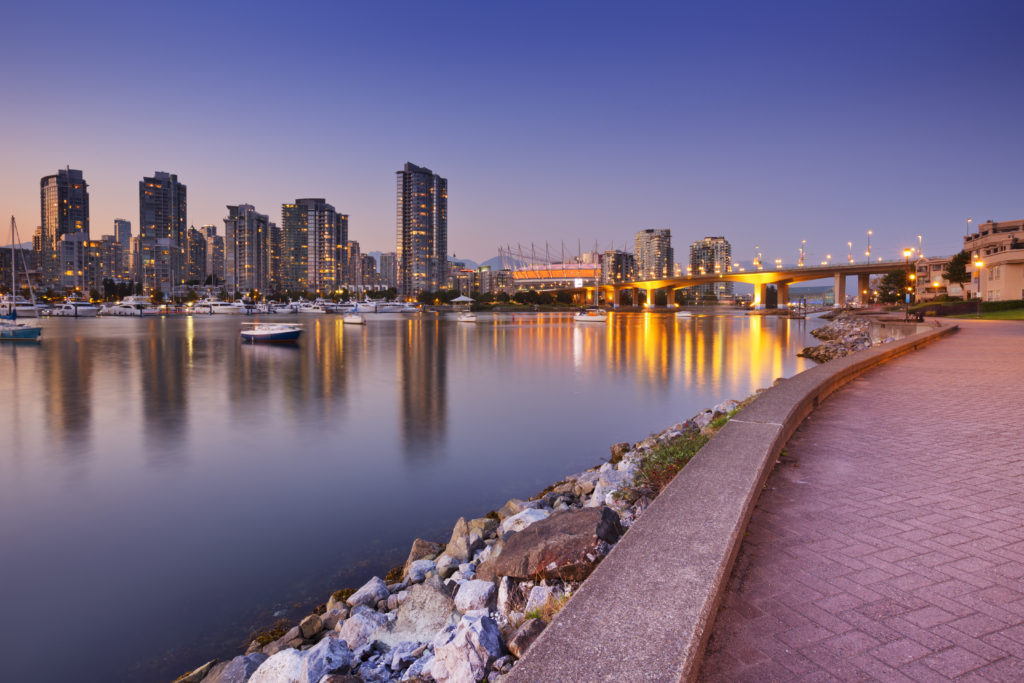 The skyline of Vancouver, British Columbia, Canada from across the water at dusk.